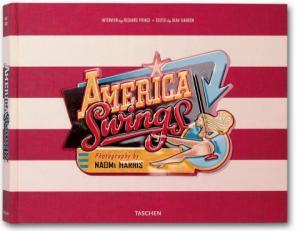 Naomi Harris's subjects are not the usual perfected androids who populate contemporary erotica, but ordinary people with extraordinary sex lives; this book explores a rarely-seen side of sex in America. This edition is limited to 1,000 numbered copies, signed by both Naomi Harris and Richard Prince. The cover features a four-color, silk screened, 3-dimensional stamped metal reproduction of a classic American motel sign, specially conceived and created for this edition.

When he discovered TASCHEN had signed her to do America Swings he asked to do an interview with her, where he reveals part of what makes her work so unique: "When I look at one of your swinger photos what I'm looking at is mostly you ‘outside' the picture looking at what you're photographing … half-naked, all naked, taking these photos of next-door neighbors having sex …”